Our winery was successful in both the Hungarian and International Wine competitions.

This year, one of the biggest and most respected international wine competitions was

Our Bikavér Superior wine has become a gold medal for our Egri Cabernet Sauvignon Superior 2013. Our wine was silver medal, and this year our Rébus 2012 Eger Cuvée has won a Champion Award for Red / Quiet Wine.

We also made a great achievement at the Vinalies Internationales Wine Competition in Paris, where our 2 wines won silver medals, from Bordeaux we came home with a Gold and Silver medal which was won by our Cabernet Sauvignon Superior 2013 (Gold Medal) and Egri Bikavér Superior 2013 .

Last but not least, the Eger Wine Region Wine Competition has won many prizes with our wines.

You can see the exact results in the images. 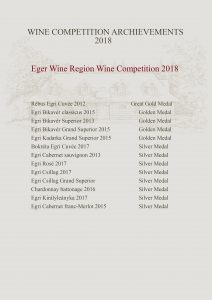 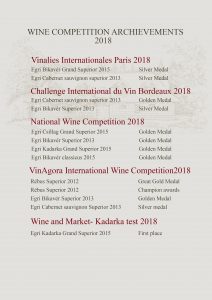